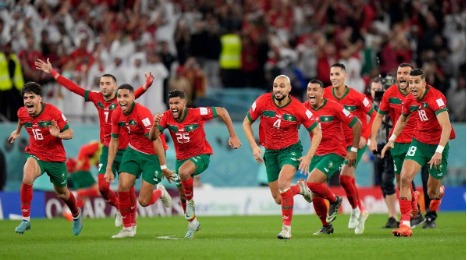 Spain leaves the FIFA World Cup 2022 after losing 3-0 to Morocco in the penalty shootout of the Round of 16. They see this as a cruel result of their efforts.

Spain vs. Morocco match was held on December 6, 2022, at the Education City Stadium in Doha, Qatar, in the Round of 16 of the FIFA World Cup 2022. Enrique’s side ruled the event throughout the 120 minutes with 77% possession of the ball. The penalty shootout went against Spain, where Morocco netted the ball three times as Spain went goalless in the decider.

Sergio Busquets, the midfielder for Spain, has called this a cruel way to decide the winner of the first knockout round. The game was tied 0-0 for the entire 120 minutes. Busquests did come close to scoring a goal but lost the shot by an inch on a rebound.

The prospect of replicating the era of the 2020 FIFA World Cup is currently four years away. That was the last time Spain won a championship. They would have met Portugal in the quarterfinals if they had advanced. Unfortunately for Spain, Morocco has a confirmed place there.

Busquets stated the players attempted to wear down their opponents to shift the tide of the game but were unable to score due to a lack of luck. Unai Simon was only able to stop one of Morocco’s shots. Fans had high expectations for his goalkeeping abilities after the Euro 2020 quarterfinal match against Switzerland.

Spain previously lost in the shootouts of Euro 2020 against Italy while appearing in the semifinal round of the tournament. So, the side is familiar with the situation that is coming their way in the most unexpected way.

Having only lost to Japan by a score of 2-1, Enrique’s team finished second in Group E during the pool stage of the FIFA World Cup 2022. One of the most unforgettable moments of the tournament thus far is still Spain’s 7-0 triumph over Costa Rica. It got closer to advancing to the Round of 16 after the 1-1 draw with Germany.

Morocco and Portugal will now compete in the quarterfinals on December 10, 2022, at 8:30 p.m. IST at Al Thumama Stadium, Qatar. Portugal enters the game with a 6-1 win over Switzerland and a 57% winning percentage. Morocco’s window of 16% will again need some luck if it wants to advance to the semifinal round of the international football tournament.

Busquets, however, has hinted that he may not be available for Spain’s future international events. He stated that the national team is now of greater importance than himself.

Busquets has urged the team to pick itself up and use the experience to bounce back, thereby helping younger talent stay positive.

Midfielder concluded that Spain did not expect to lose to Morocco but that the team must now accept this reality as they return home.

What American Social Media Are You Using?